The truth is that one of the mind’s chief functions is to spot and utilize patterns as shortcuts, in order to process the multitude of information we observe each day.

We are more reliant on environmental triggers than we’d like to think.

In one study conducted on “habits vs. intentions,” researchers found that students who transferred to another university were the most likely to change their daily habits. They also found those habits easier to change than the control group because they weren’t exposed to familiar external cues.

In short, those who had trouble falling asleep were told to only go to their room and lie in their bed when they were tired. If they couldn’t fall asleep, they were told to get up and change rooms.

Strange advice, but over time, researchers found that by associating the bed with ‘It’s time to go to sleep’ and not with other activities (reading a book, just lying there, etc.), participants were eventually able to quickly fall asleep due to the repeated process: it became almost automatic to fall asleep in their bed because a successful trigger had been created.

Perhaps we are more like Pavlov’s dogs than first imagined. If you take a look at studies published in books like Mindless Eating, it is scary to see how small cues can greatly impact our behavior:

Good to know, but is it possible to use triggers like these in order to encourage good behavior?

Using Your Environment to Change Behavior

Since we know that discipline is built like a muscle — and can likewise be worn out — environmental changes might be useful in getting ourselves to do difficult tasks regularly.

Below I’ll outline some of my favorite methods found through the academic literature, as well as some personal tests conducted by myself and others.

1. Task association. Reading is an integral part of good writing. When writing for the web, this becomes somewhat of a first world problem: you’re always a click away from that next great source of inspiration, so it can be hard to stop consuming and start getting things done.

One method I’ve used to combat this, that comes right out of the stimulus control research, is to strictly associate an ‘outlet’ with a specific task.

In other words, when I sit down to use a particular piece of tech, I can only do a single designated task. For me, it looks like this: 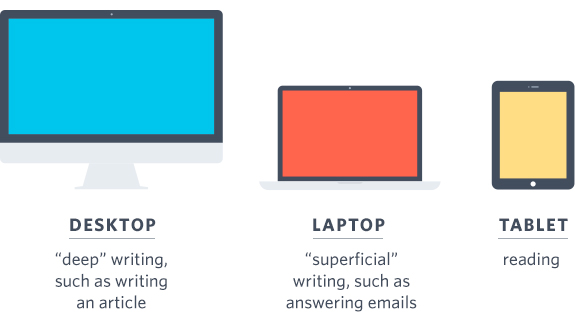 I’ve found that training myself in this way has worked just as well as with those salivating canines—I have less of a problem getting interrupted because I know desktop = writing, and there should be no emails or random articles on the screen.

You can also use task association with environments. Your ‘office’ should be a place where you work; I learned that the hard way when I initially ended up placing too many ‘fun’ things in my home office.

It turned it into this nebulous location that wasn’t always associated with work. Instead, start assigning certain locations with very particular activities.

Picking a location outside the home is often the most effective. Have writing to do? Head to a local library or coffee shop and that place will become associated with ‘writing time’.

2. Reduce or increase friction. Your environment can also be tweaked to make certain tasks more difficult or easier to do. As Stanford psychologist B.J. Fogg is so fond of saying, tough habits stick when you can simplify the behavior:

In an earlier article on building good habits I briefly refer to this as eliminating ‘ah-screw-its’, or those moments which make you want to abandon a task. You can also intensify these ‘ah-screw-it’ moments, however, if you are looking to prevent yourself from performing a bad habit.

Habits are the brain’s way of simplifying the movements required to achieve a given result, so using the environment to increase friction really is the best way to influence your own behavior. Since your willpower is such a fragile thing, instead focus your energies on making undesirable habits harder to perform.

When it comes to reducing friction, the most universal example is to apply the ‘hit the ground running’ mindset to your toughest habits.

I pack my gym clothes in a bag the night before and place them right next to my door. On cold days, I even place my jacket on the counter-top by the door. By again designing for laziness, I eliminate all possible excuses by getting things ready when my willpower is high.

Want to floss every day? Best to not hide your floss in a cabinet, put it out in where it can’t be missed, such as by your toothbrush. Want to stop watching so much TV? Take the batteries out of your remote and put them in a kitchen drawer.

The examples could go on forever, but the lesson here is that instead of trying to force habits on yourself, spend effort on making good habits easy to engage in, and bad habits difficult to engage in.

3. Using contextual cues. According to research on implementation intentions, it’s easier to make a habit consistent if it’s built off of an existing chain.

In other words, Task X becomes easier to perform regularly if it is always preceded or followed by Event Y. Here’s an example — I have a ‘shut down work’ ritual every day at 6:30pm. Following this event, which happens every day, I clean my house (not top to bottom, just ‘maintenance’).

Because Event Y happens at the same time every day, it was easy to build on the second task, because there was a trigger I could rely on… every single day, without fail.

Try scheduling tasks for consistent parts of your schedule: coming home from work, during/after your lunch break, as soon as you wake up, etc.

Applying the ‘as soon as you wake up’ technique to my own life, I read literally the minute I jump out of bed. Although I love reading, I often have a problem getting started, but this trigger has made it easy for me to accomplish the 1 book per week goal I’ve set for myself.

This process was found to be even more effective than ‘motivational materials’ in multiple studies on goal achievement, including this one illustrated by James Clear, which showcased how participants who used implementation intentions (knowing where and when they would exercise) ended up following through far more often than those in the control group.

4. Routinize with systems. Few things happen overnight. Success is most often the result of consistent execution of a single habit, so perhaps it’s no surprise that research suggests having too many choices is the enemy of long-term goals.

In other words, having ‘options’ makes consistent behavior harder to maintain. I like Ramit Sethi’s take on this via the ‘tripod of stability’, or the practice of routinizing some important aspects of your life to maintain consistency, but being more aggressive with the rest of your decisions.

The classic financial example is saving vs. spending: instead of relying on willpower to save money, take away the decision altogether by having automatic withdrawals from your paycheck into an IRA and/or a savings account. This allows you to spend with less worry, since the system has taken care of stability for you, by withdrawing money before you even see it.

That small systematic change can have a measurable impact alone because it will compound (not unlike your savings!) if done over time. As this great article on the Harvard Business Review would put it:

Identify the aspects of your life that you consider mundane, and then ‘routinize’ those aspects as much as possible. In short, make fewer decisions.