With the rapid pace of technology, have we been able to keep up with the new stimulation that is available?

Some research suggests that certain things we enjoy today would be classified as supernormal stimuli, a term evolutionary biologists use to describe any stimulus that elicits a response stronger than the stimulus for which it evolved—even if it’s artificial.

Before we get into the research, let’s summarize the concept of a supernormal stimulus. The comic below will explain the basics and will take you less than 3 minutes to read.

What are supernormal stimuli? 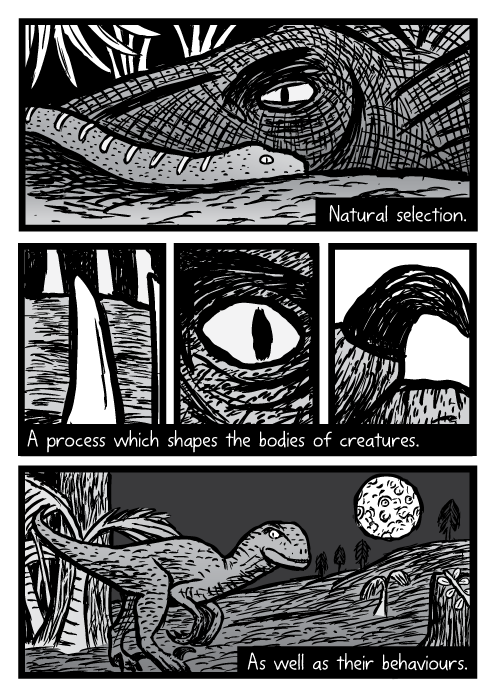 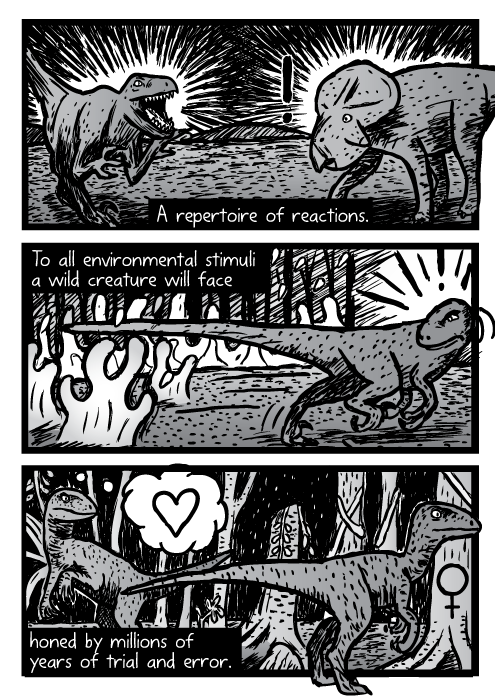 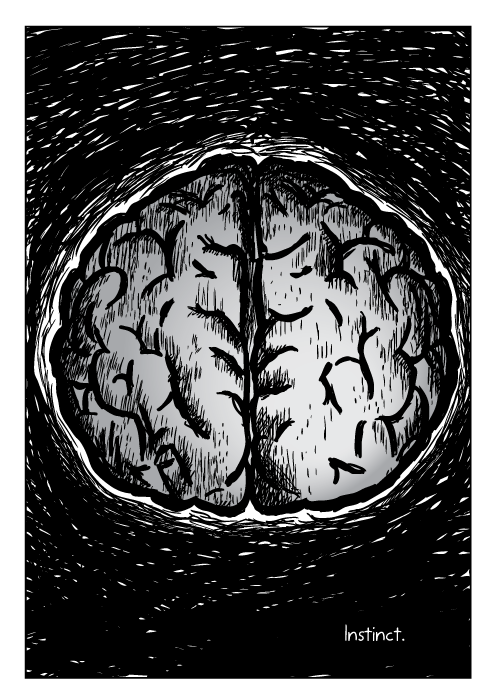 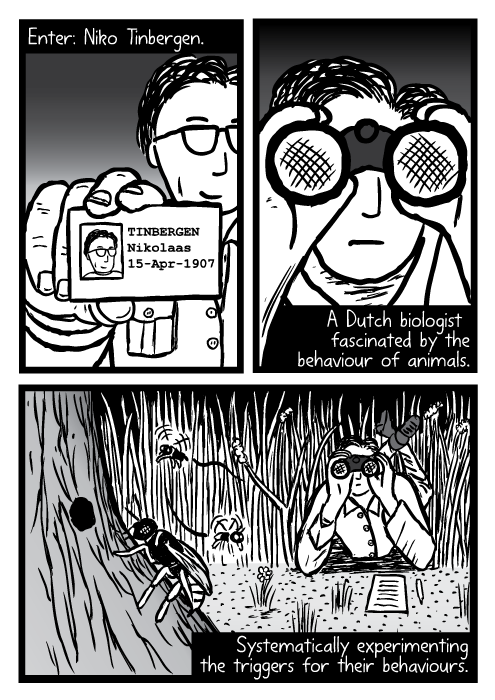 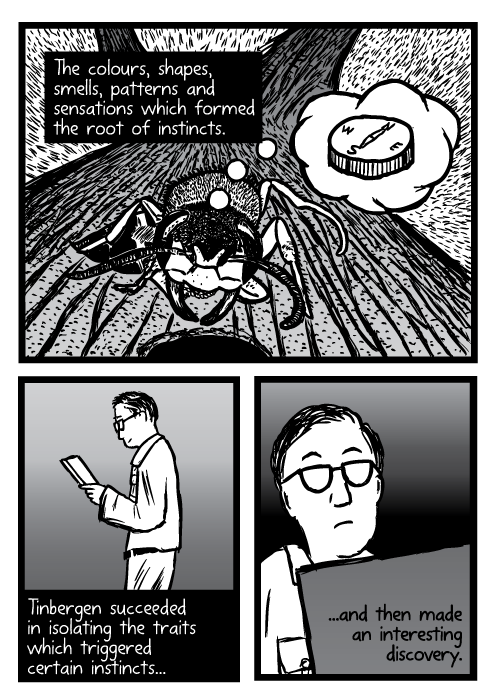 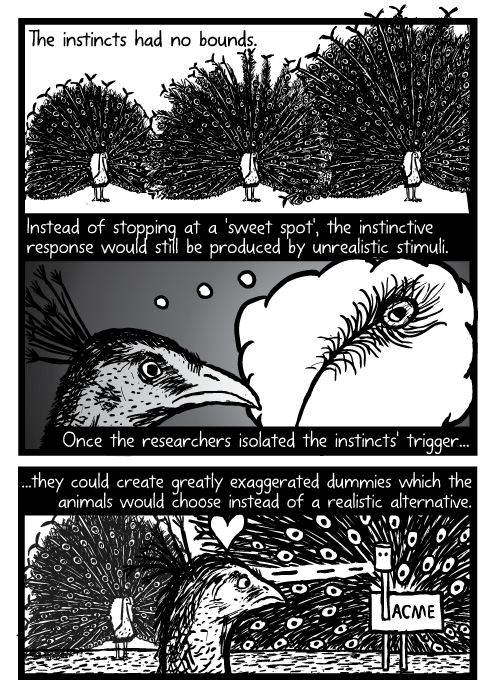 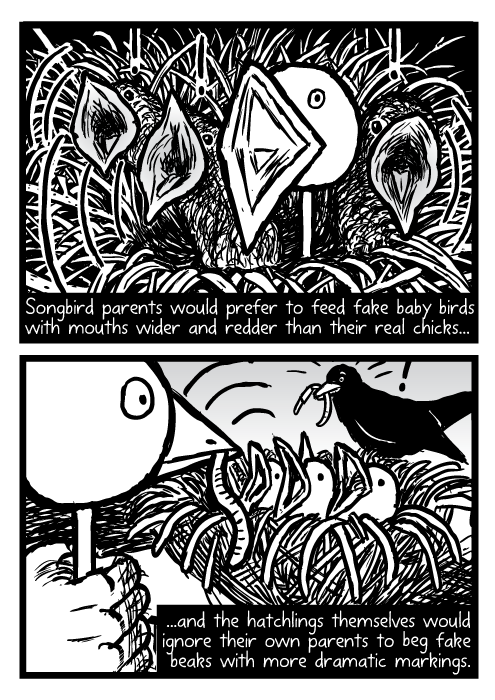 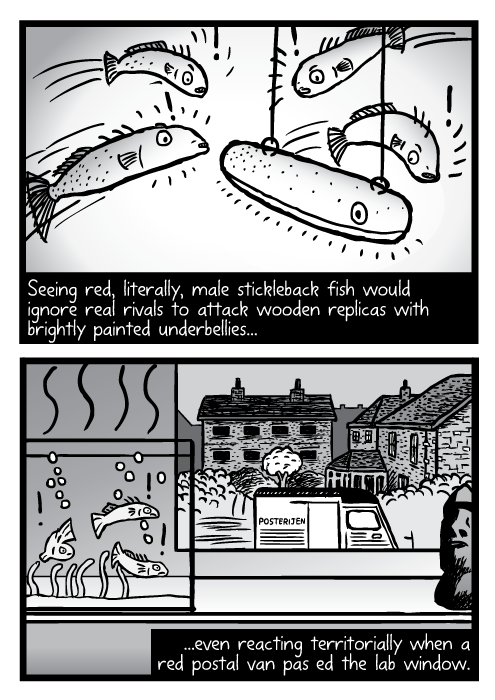 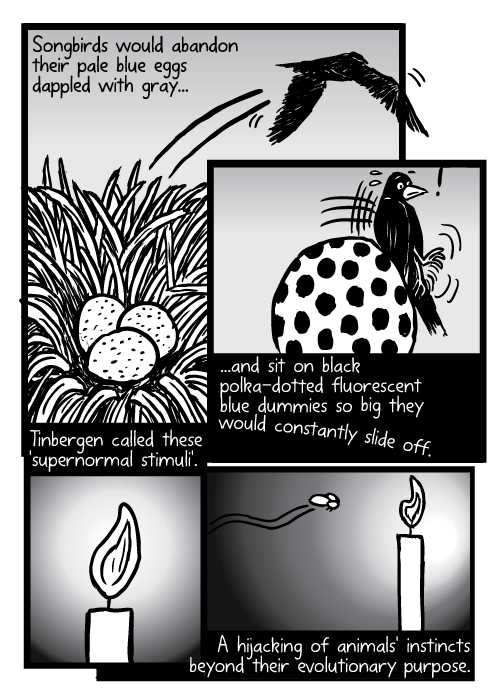 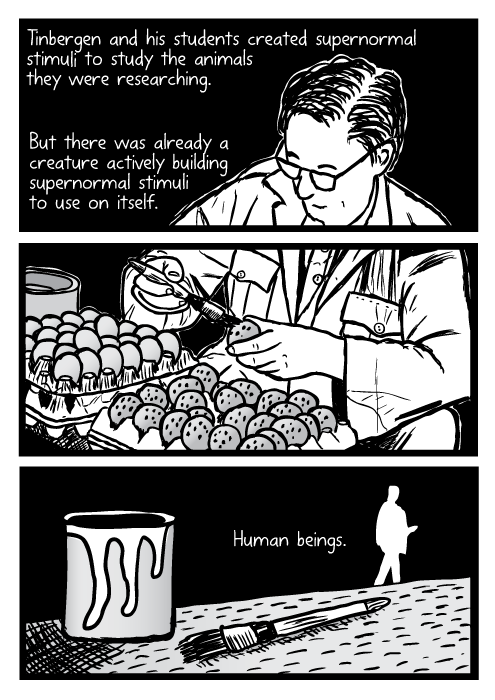 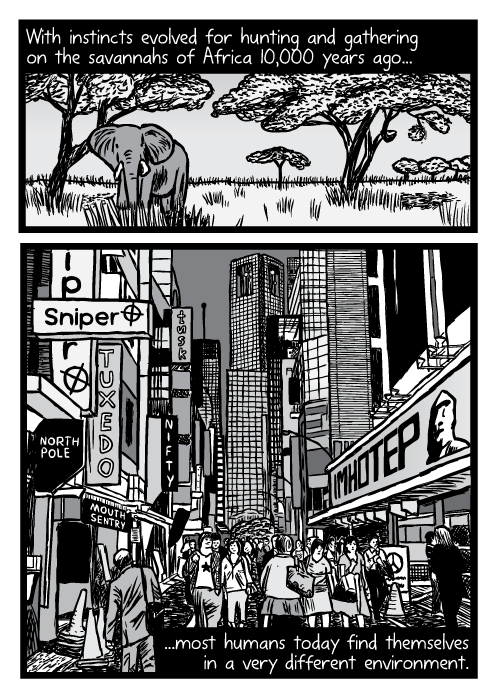 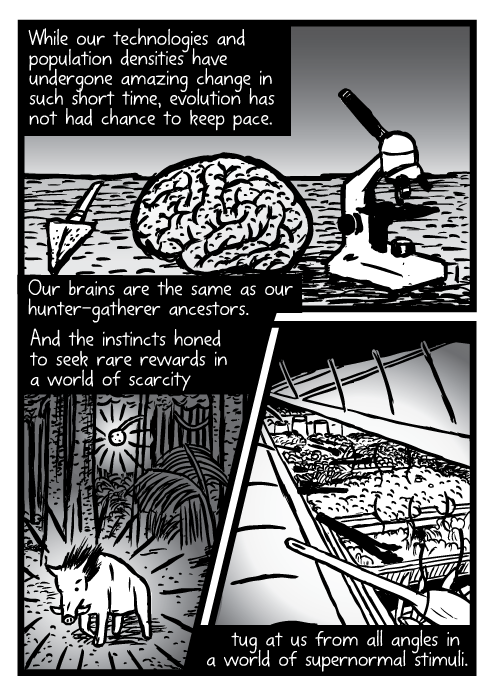 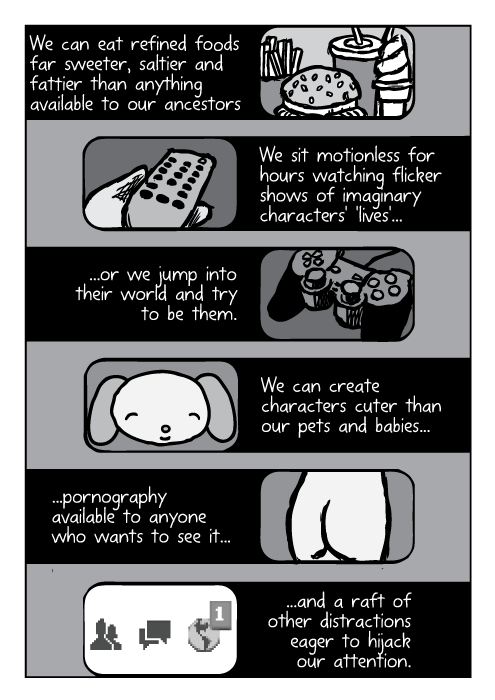 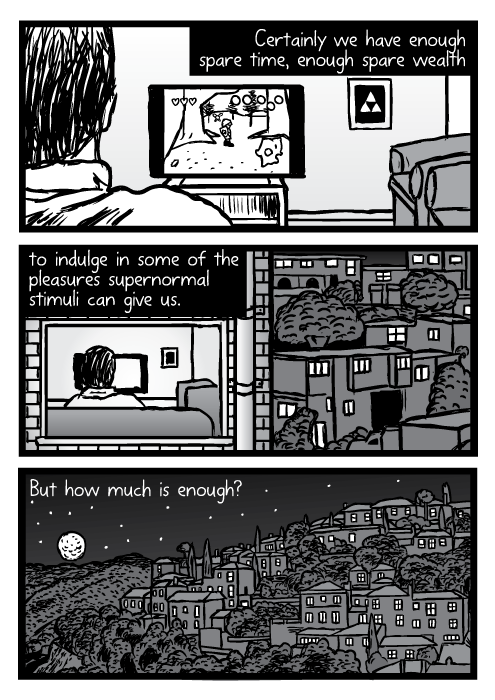 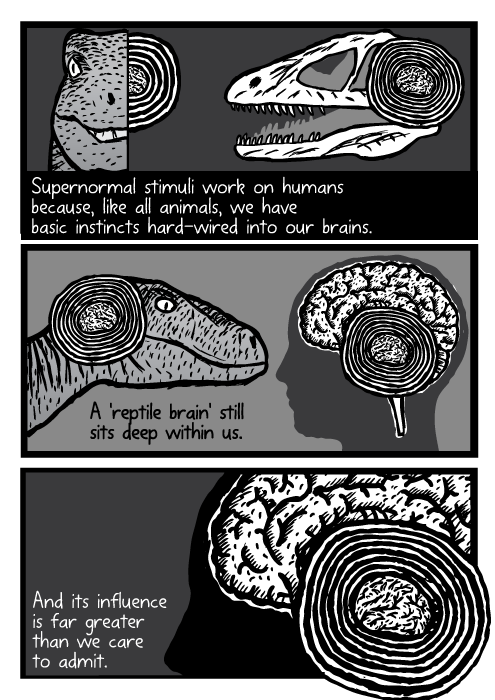 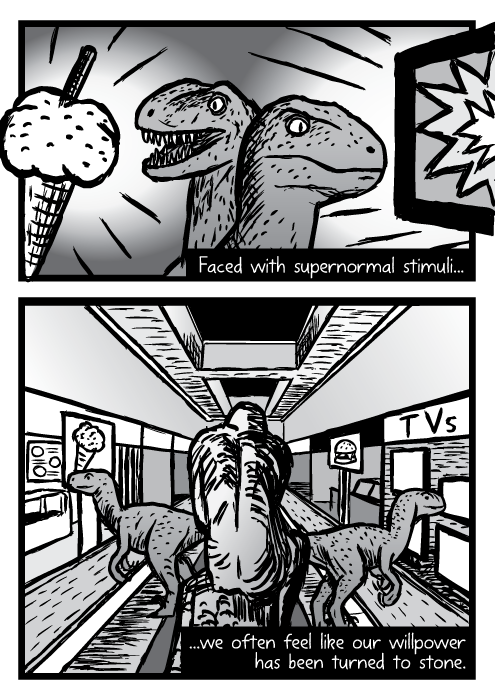 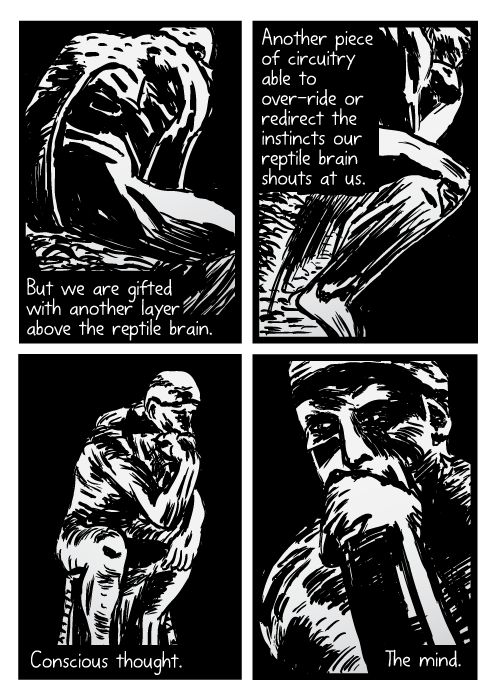 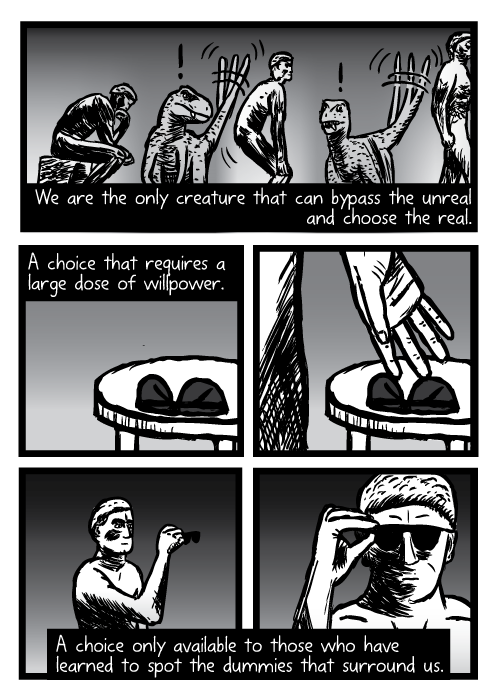 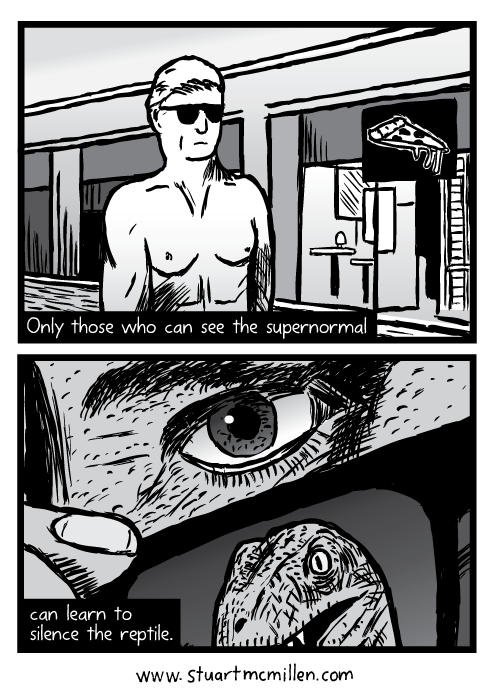 Comic by the talented Stuart McMillen, featured with permission.

How does supernormal stimulation affect you?

Nikolaas Tinbergen, a Nobel Prize winning ethologist, is the father of the term supernormal stimuli. As noted:

In a very quick span of time, Tinbergen was able to influence the behavior of these animals with a new “super” stimulus that they found themselves attracted too, and which they preferred over the real thing.

Instinct took over, and now the animals’ behaviors were a detriment to their livelihood because they simply couldn’t say no to the fake stimulus.

Much of Tinbergen’s work is beautifully captured by Harvard psychologist Deirdre Barrett in the book Supernormal Stimuli: How Primal Urges Overran Their Evolutionary Purpose. One has to wonder if the leap from these findings to human behavior is near or far.

Dr. Barrett seems to think that the link is closer then we believe, arguing that supernormal stimulation govern the behavior of humans as powerfully as that of animals.

The hypothesis is that just like Tinbergen’s quick introductions of abnormal stimulation to animals, advancing technology may have created a similar situation for humans.

1. The highly addictive nature of junk food is one of our generation’s great concerns—food is being engineered specifically to be more appealing than its natural counterparts. Is it any wonder then that when fast food is more thoroughly introduced to other countries, people start consuming it more often?

2. It could be argued that for a large span of time humans had a relatively stable palette. Now a new food “concoction” comes out every week. How might this be affecting us? Some studies have suggested that foods like processed grain came about far too quickly and are doing quite a number on your mind and body.

3. Food is one of the toughest things to struggle with because it’s an absolute necessity—the problem with junk food is due to the fact that it is a “super stimulating” version of a natural reward we are supposed to pursue. Food addiction is the real deal, and a tough habit to break because the triggers are ever present.

1. A quick peek in my home office would show a still functioning Super Nintendo hooked up with Chrono Trigger ready to go. I don’t think that video games cause excessively violent behavior (research agrees), but I do have to admit that it seems video games may be addictive for some people, and in particular, for certain personalities.

2. Television addiction may cause some users to elicit the signs of a behavioral addiction—users often watch TV to change mood, but the relief that’s gotten is only temporary, and often brings them back for more.

As psychologist Susan Weinschenk explained in a 2009 article, the neurotransmitter dopamine does not cause people to experience pleasure, but rather causes a seeking behavior. “Dopamine causes us to want, desire, seek out, and search,” she wrote.

1. Unsurprisingly, psychologists are now giving serious consideration to the web, recognizing that it may be a very addictive outlet. It allows unfettered control to engage in nearly anything, and some countries like Japan and South Korea have had serious problems with reclusive, socially inept individuals who have a very unhealthy internet obsession—one story I read detailed a man who hadn’t left his apartment in 6 months.

2. Social media has been shown to make some people depressed—they see the highlight reel of others, and may feel worse about their own life. These pruned and often misleading looks into others lives was never available before the web. In spite of this, people can’t stop checking them, thinking that they might be missing out on something.

3. Internet overuse, for some people, may be hurting their ability to focus. The quick bursts of entertainment that the internet provides, and the fact that information is always a click away, may (through overuse) cause a decrease in conceptual and critical thinking. Some have argued that the internet can become ‘chronic distraction’ that slowly eats away at your patience and ability to think and work on things for extended periods of time.

What should you do?

This can seem like a lot to take in at once.

Before you panic, freak out, and throw away all of your Oreos + cancel your internet subscription, remember—everything in moderation.

There is a lot of research that counters what we’ve looked at above. Explore books like The 10,000 Year Explosion for more from that perspective. Also, consider that resources are all in how you use them.

Take the Internet: there are signs that in some ways the Internet might become a distraction, but think about its contributions. The web is the best source in the world for information and knowledge, so how it affects you depends on how make use of it.

We are all perfectly capable of using and engaging with supernormal stimuli.

The artist of the comic above, Stuart McMillen, correctly describes why you shouldn’t be afraid of information like this. In many ways, it should be comforting:

In both cases, the main change is awareness. Awareness that the reason we are drawn to sickly desserts is because they are sweeter than any naturally-occurring fruit.

Awareness that watching television activates the primitive ‘orienting response’, keeping our eyes drawn to the moving pictures as if it were predator or prey. Awareness that liking ‘cute’ characters comes from a biological urge to protect and nurture our young.

I have not removed supernormal stimuli from my life, nor do I intend to do so fully. The key is spotting the stimuli as they appear, and engaging the mind to regulate or override temptation.

I echo Deirdre Barrett’s conclusion that sometimes it can feel more rewarding to say no to the supernormal, than to cave into impulse. Only awareness will help stop the supernormal from becoming what is ‘normal’ in our lives.

(You should subscribe to Stuart’s newsletter to hear about new comics he’s published. Also, be sure to stop by his website and check out his other comics.)

The solution, so it seems to me, is to simply avoid habituation. C.S. Lewis has some great thoughts on this: “Only those who try to resist temptation know how strong it is. After all, you find out the strength of the German army by fighting it, not by giving in. You find out the strength of the wind by trying to walk against it, not by lying down. A man who gives into temptation after five minutes simply does not know what it would have been like an hour later.”

Giving something up for just a small period of time can help you understand its place in your life, especially when it’s an optional activity. If you try to stay away from something for just a few days, and you find yourself becoming anxious and agitated, that could be your body telling you something important. If you can give it up “cold turkey” with no problem, that’s important information, too.

So no, don’t panic and freak out. Just recognize that it’s your job to make sure you are always in control; “those who do not move do not notice their chains.”

If you’ll excuse me, I need to get back to wasting time on the Internet.