The Most Important Mindset for Long-term Success

Psychologist Dr. Grant Halvorson has published excellent essays like The Trouble With Bright Girls, where she has addressed how this fixed mindset is setting students up for failure.

Bright girls, when given something to learn that was particularly foreign or complex, were quick to give up—and the higher the girls’ IQ, the likely they were to throw in the towel.

Researchers have uncovered the reason for this … bright girls believe that their abilities are innate and unchangeable, while bright boys believe that they can develop ability through effort and practice.

But this problem goes much deeper. Although Halvorson points out that young girls may be especially susceptible, all people, young and old, are at risk of succumbing to a fixed mindset.

We often persuade ourselves into thinking that we need to have established talent and confidence before we can accomplish something. The reality is that small accomplishments lead to confidence, and that talent is often overrated.

This sort of thinking aligns with the growth mindset, a concept Dr. Carol Dweck of Stanford discusses in her book Mindset: The New Psychology of Success.

The first step to getting the things you want is believing you deserve them. Far from a trivial platitude, this sort of thinking actually closely mirrors what modern psychology depicts in how our beliefs influence our behavior.

Dr. Dweck’s studies posit that there are two basic mindsets that control how most people see themselves.

Those with a “fixed mindset” assume intelligence, character, and creative potential are unchangeable attributes writ in stone since birth — that they cannot be modified in any meaningful way. They further assume that success is simply a result of this inherent talent, and as a result, they often avoid failure in order to maintain an aura of infallibility.

Those with a “growth mindset” have a much more malleable view on success. They do not view failure as a reflection of their ability, but rather as a starting point for experimentation and testing of ideas. Their main advantage is in treating unsuccessful attempts simply as another data point — “This didn’t work out, but I eliminated one option and will now pursue the next.” 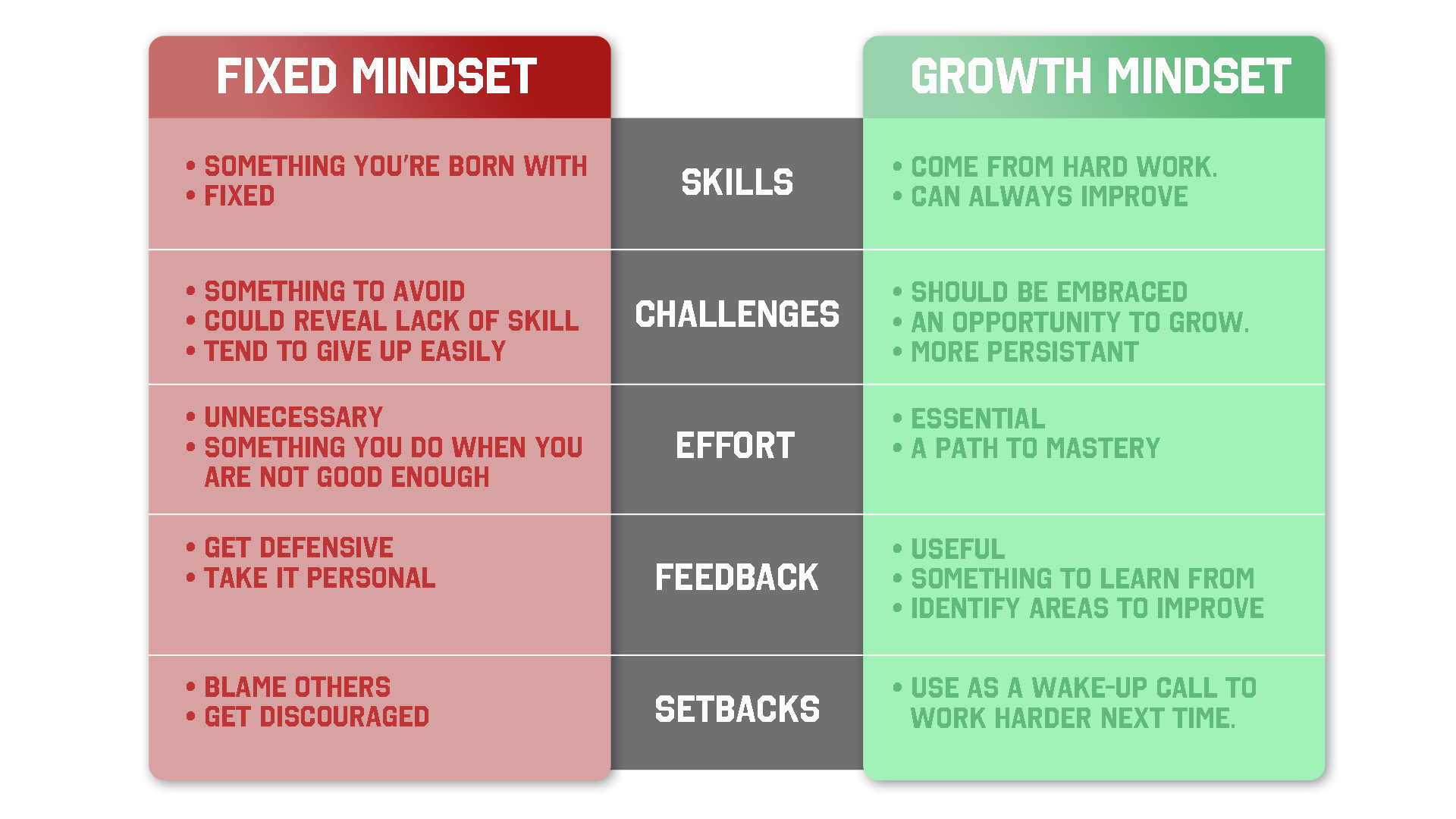 How You See Yourself

Perhaps you’ve heard this sort of advice before: “Praise your child for their effort, not for their intelligence.”

This comes from papers like Praise for Intelligence Can Undermine Children’s Motivation and Performance, which conclusively show that reinforcing how smart a child is can be detrimental: they face obstacles differently than those children who were consistently praised for being hard workers. 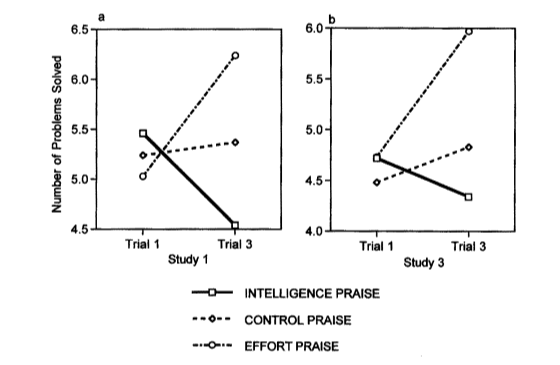 When you believe strongly in innate ability, any sort of initial friction creates a desire to give up before you embarrass yourself. Look at how subjects who were praised for “effort” reacted — they solved even more problems on the next trials, improving as time went on.

Those praised as “smart” kids often coast on their intelligence until they start facing real challenges. Once they do, they view their failure to breeze through these difficulties as a threat to their ego. This often leads to the avoidance of failure, keeping the “smart kid” persona intact.

As you might expect, this transfers over to adulthood. Dr. Dweck cautions us by stating just how powerful these underlying beliefs can be:

For twenty years, my research has shown that the view you adopt for yourself profoundly affects the way you lead your life. It can determine whether you become the person you want to be and whether you accomplish the things you value. How does this happen?

How can a simple belief have the power to transform your psychology and, as a result, your life? Believing that your qualities are carved in stone — the fixed mindset — creates an urgency to prove yourself over and over.

If you have only a certain amount of intelligence, a certain personality, and a certain moral character — well, then you’d better prove that you have a healthy dose of them. It simply wouldn’t do to look or feel deficient in these most basic characteristics.

A body of research supports her claim, and we are now beginning to understand how this “fixed mindset” can insidiously sabotage how we see ourselves, which in turn affects our behavior and creative effort.

We can confidently say that you don’t need to worry about being a math person in order to succeed in math.

The knee-jerk reaction to the “growth mindset” is often criticizing it by pointing out individuals who have clearly benefited from talent — as if anyone is claiming that talent isn’t an advantage.

Of course it is. The thing to remember is that talent plays a smaller role than hard work for long-term success.

There are two ways in which talent truly matters.

The key takeaway from the literature on how we view our abilities is that it’s beneficial for everyone—young and old alike—to see their basic qualities, skills, and habits as things they can cultivate through extended effort.

No one should ever try to claim that talent doesn’t matter at all, but we need to recognize that success is less dependent on the hand you are dealt and more dependent on how you play the hand.

Believing in Growth: Use Small Wins

The key to developing a growth mindset is to understand why “fake it until you make it” is actually quite effective — it results in small wins, which then lead to genuine confidence.

That is exactly what you should do: focus on creating small wins through changing your habits. Make daily “micro quotas” (10 minutes of working out a day) that are so easy you can’t say no.

In short, nail it then scale it. Over time, this creates a key trait in the growth mindset: a passion for learning rather than the need for approval.

Initial progress creates the desire to move forward. The innate mindset is what stops most people from starting (“I’m not a fit person…”), but the growth mindset will blossom after just a few small wins prove, “Hey, I can definitely do this.”

If you want to improve in anything, start seeing mistakes and failures for what they are — the precise means of your education.